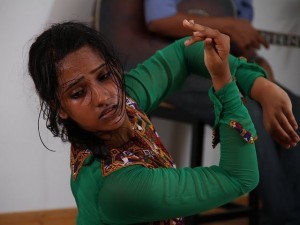 Suhaee Abro is a dancer from Karachi who practices the ancient Indian classical dance forms of Oddissi, bharatnathayam as well as modern dance. She is the daughter of painter Khuda Bux Abro and writer Attiya Dawood, is a pupil of veteran dancer Sheema Kermani. Both Sheema ji and Suahee have been inspired by the dancing girl of Mohenjodaro and her perception in contemporary Pakistan.

Even though Suahee has learned Manipuri, Kathak and Oddissi, she specialize in Bharatnatyam since that was her first love. She has been performing dance, theatre and a music video based on women issues made by Sheema Kermani’s NGO, Tehrik-e-Niswan since she was eight. She now choreographs her own dance forms as she “discover myself as a dancer”.  Along with a musician friend, Ahsan Bari and her father, Khuda Bux Abro, Suahee has founded a Theater group called  Nritaal where she directs performances based on poetic works of Faiz Ahmed Faiz, Ameer Khusrau and her mother Attiya Dawood. As a child Suhaee started by performing against the backdrop of of her mother, Attiya Dawood’s feminism poetry. About her feminist association, the young performer believes: “I am a feminist. Why else would I do what i do?”

Suahee also acts and recently played the lead role on the Hum TV drama serial Sanjha which is focused on subtle and overt forms of sex slavery and domestic abuse in Pakistani society.