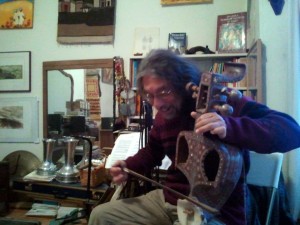 It is today scientifically impossible to reproduce a prehistoric melody but it is possible for us to hear the timbre of an ancient instrument, its texture, its resonance, its harmonic spectrum.

For us to experience the sound of reed, of bronze cymbals, of ram horns and camel strings we can deploy a sonority hierarchy that predates our modern conceptions of music. The attempt here is not to compose a  historical reconstitution, but a a modern interpretation. For example, when the Sarinda is used to evoke the ghostly Dancer of Meluhha, the full spectrum of sound from the instruments are not deployed, rather it is the skeleton of a Sarinda, a bowed string made of camel and attached to a bone produces this lament.

To approach such characteristic instruments and their strong cultural connotations while avoiding the usual clichés, we orchestrate the following;

the harmonic spectrum of a sitar (for an atmosphere of mystery), a looped sarinda rhythm ( to sustain a suspense), a sampled Ney generated by computer and tablas played on a midi-guitar (for a doppler effect of 5000 years of distance.)

Instruments for the compositions include gongs,tam-tams, santoor, sarinda, sitar, tablas, ney (sampling), vocals. All instruments and compositions are by Dhyani except for the Shofar(Ram horn) which is played by Jane Julig.