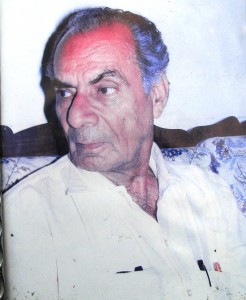 Sobho Gianchandani was born in 1920 at Dokri, a village on the banks of river Indus next to the archaeological  site of Mohenjodaro. Comrade Sobho, as he is lovingly called,  is a Sindhi social scientist, and revolutionary writer. He was the first non-Muslim and non-Urdu recipient of the Pakistan’s top literary Kamal-e-Fun Award (for 2004), which is given every year to an eminent writer in recognition of his life-long achievements in the field of literature.

Comrade Sobho remains a source of inspiration for many generations of activists, writers and social reformers. Mr. Gianchandani has been associated with many political parties and campaign groups, including the Indian National Congress and Khudai Khidmatgar and is the founder of many progressive, democratic and nationalist campaigns in Sindh. After the partition, Pakistani authorities pressured him – like millions of other Sindhi Hindus — to leave Sindh and migrate to India, but Sobho refused, and in consequence he was forbidden to travel abroad until 1998. Sobho was imprisoned for more than a year during the British rule, and after the partition, he fell under the wrath of Pakistani establishment and has many jail sentences to his credit, including one in 1971 for opposing military sponsored genocide in Bangladesh. Comrade Sobho and Mr. G. M. Syed were close associates and comrades in different aspects of the Sindhi rights movement.
In 1938 -39 Comrade Sobho cleared his intermediate and attended Shantiniketin an institution run by Rabindranath Tagore where he was called out by Tagore himself as “the boy from Mohenjodaro”

“I’ve never doubted that Pakistan would overlook my contribution”